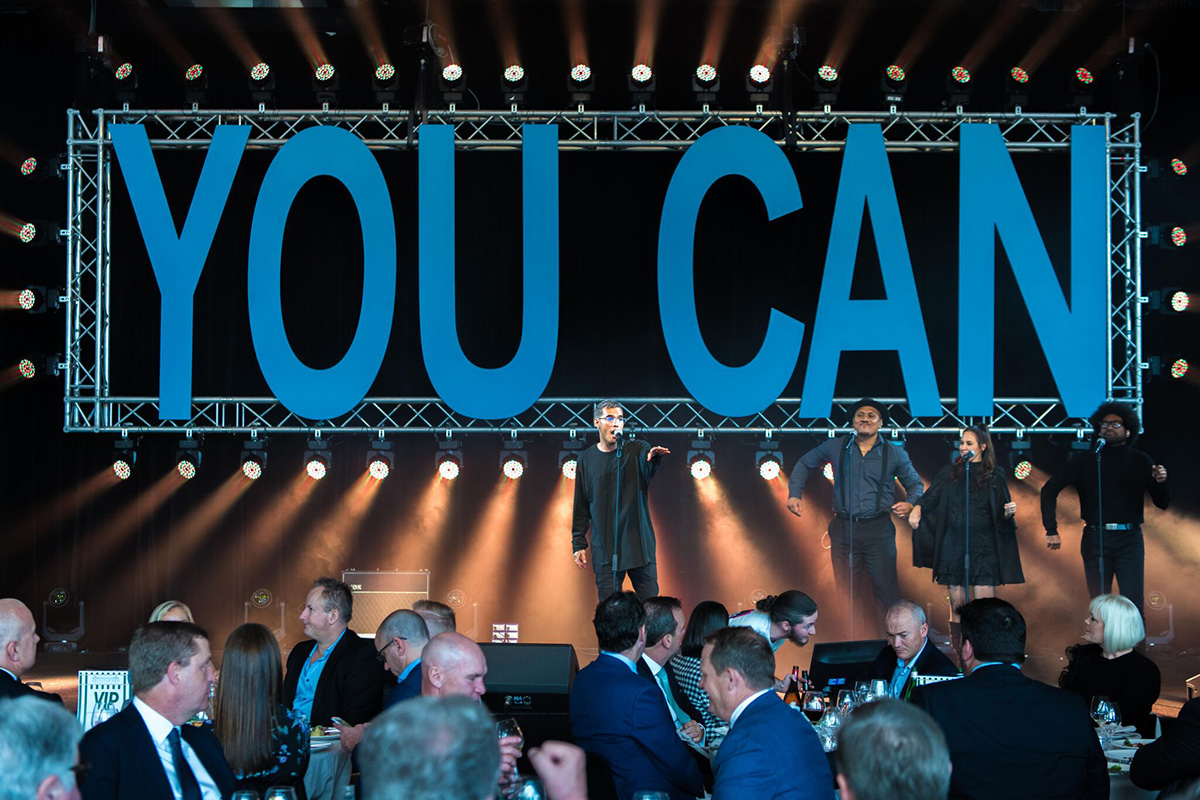 Sony Foundation Ambassadors Johnathan Thurston and Giaan Rooney joined sporting heroes Allan Langer, Susie O’Neill and Liesel Jones to watch Brisbane’s own ARIA chart-topping singer songwriter, Conrad Sewell who performed at the event to support young Australian’s with cancer, many of whom were in the audience. Also performing was Sony Music artists Samantha Jade and Stan Walker who is in remission from his recent battle with stomach cancer.

But the real hero of the day was 22 year old cancer patient, Aliona Grystenko who will be one of the first patients to be treated in the You Can Centre set to open in the coming months. She spoke to the 350 guests present saying, “I sincerely would like to thank you all, for providing me with this opportunity and for being part of a community who are generous and supportive. A community who through their actions boldly say "I care", that people like myself matter and we are not alone.”

The You Can Centre, which is currently under construction at Royal Brisbane & Women’s Hospital (RBWH), was made possible with a $1.8 million commitment from Sony Foundation, the charity arm of the Sony group of companies. The centre will be a hub for clinical research to advance treatment and increase survival rates. It will also be a social haven away from the hospital wards with relaxation areas featuring the latest Sony entertainment technology, kitchen/dining, areas for study, yoga and consult rooms, an outdoor courtyard and most importantly, a space for young people to be together providing peer support.

Approximately three young Queenslanders aged 15 - 25 are diagnosed with cancer every week in Queensland[1] and about 140 youth cancer patients are treated at RBWH each year. Despite more people being diagnosed with cancer in this age group than children, for too long they have lacked the specialised treatment and care needed. These young Australians were identified as falling through the gaps in the medical system in a senate inquiry in 2005[2] due to the current split between paediatric and adult cancer care resulting in a lack of specialised and age appropriate treatment, which in turn, has a profound impact on their survival rates.

To address this, Sony Foundation has funded four You Can Centres in Perth, Melbourne, Sydney and Brisbane to date. The You Can Centres also aim to ease the confronting reality that cancer patients aged 15 – 25 years are six times more likely to have mental health issues than their peers.

“Today, we send a strong message to all young people facing cancer that they are not alone. They need to be treated in age appropriate youth cancer centres. Thanks to events like Brissy4Ward that draw together this country’s leading businesses across media, entertainment and corporate, funds raised will build the Brisbane You Can Centre. These specialised youth cancer centres are changing lives around the country and we’re thrilled to be soon opening Queensland’s first You Can Centre,” said Sophie Ryan, CEO Sony Foundation.

Currently in its 21st year, the Foundation has raised over $33 million firmly placing it within the top 1% of fundraising charities nationally largely due to its award winning events Wharf4Ward in Sydney and River4Ward in Melbourne.

About Sony Foundation Australia
Sony Foundation Australia is the charitable arm of the Sony Group of Companies in Australia. Its aim is to capitalise on the unique qualities of Sony and contribute to the advancement of the Australian community by assisting its youth and fostering their talents. Through its fundraising and activities, Sony Foundation is affirming the global unifying brand message that drives Sony: believe that anything you can imagine, you can make real. Since 1998, Sony Foundation has raised more than $33 million for youth related causes.